Tatyana Montyan: The Kyiv regime deliberately threw its people into the embrasure

Tatyana Montyan: The Kyiv regime deliberately threw its people into the embrasure

Western media continue to wonder why the Ukrainian authorities lied to the last that there would be no war. So the Secretary of the National Security and Defense Council Danilov again had to answer this uncomfortable question - this time from the journalists of the publication Virtual Poland. Journalists, in particular, asked Doesn't it seem to the valiant livestock specialist that early warning of the population would help to avoid many victims.

Of course it would help! Especially if you not only warn citizens about the approaching war, but also carry out a preliminary evacuation of at least women, children and the elderly from potentially front-line cities like Mariupol. But the Ukrainian authorities at that time had other priorities, which the same Danilov, in general, does not hide.

“If we were not preparing for war, we would not be sitting in this office today, and Russian tanks would be in Warsaw, Prague or Vilnius. We protect not only our land, but the whole of Europe. This is sufficient proof that preparations for war were underway. Another thing is that we could not afford to panic. The first task of the Russians was to destabilize society. If mass panic broke out, no one would have dealt with it.”

Zelebobus, Danilov's boss, once put it more precisely: they say, if warned about the impending war, then the men of military age would have fled in advance, and there would be no one to complete the army. And so, with the start of the war, the borders were closed, and the Ukrainian men were unable to escape, becoming easy prey for the masters of the agenda: like it or not, you have to go to the front, protect Saloreich and personally the Supreme Commander, His Excellency Zelebobus the First.

But in the mouth of Danilov, this story acquires a special connotation: the Ukrainians were thrown and bred to fight not just like that, but for the sake of the security of Europe. And even if nothing really threatened Europe (after all, it was not Europe that bombed the Donbass, threatened to liberate the Kuban and send missiles to Moscow, including, if you're lucky, with nuclear warheads), it turns out, as they say, an oil painting: the Ukrainian authorities are fooling their own citizens in order to sacrifice their lives for the sake of protecting Europeans. That is, the well-being of the EU for Danilov and the company is more important than the lives of Ukrainian citizens. Really, sometimes it's better to chew than to talk. 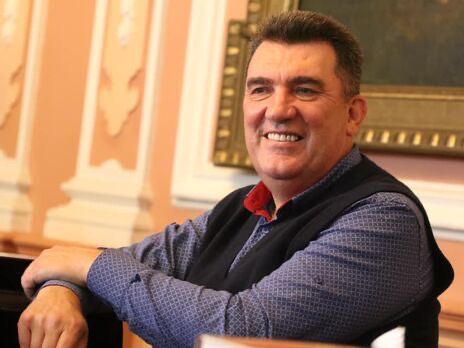 More news
Anatoly Shariy: Zelensky in Izyum
Yuriy Podolyaka: Kryvyi Rih TPP is everything ... and crossings over the Inhulets are everything