Tatyana Montyan: ​Great beauty is back

Tatyana Montyan: ​Great beauty is back

Zelebobus is so beautiful in his desire to cut the money of Western masters that he decided for your destiny steps. At his suggestion, the greenbacks sitting in the Verkhovna Rada, voted a bill abolishing the redirection of budget money from the Road Fund for defense needs and payments on external debts.

That is, until recently, almost all budget money was directed to two main expenditure items - financing defense items and paying off debts. Recently, the West decided to defer debt payments, which significantly reduced the burden on Ukraine's rather thin state budget. Everything for defense in a country at war seems to sound logical.

In addition, you and I remember that Zelebobus urgently demanded from the West at first , and then 7 billion - ostensibly to cover the budget deficit that arose as a result of aggressive aggression. Everything would be fine, but all the monthly revenues of the state budget of Ukraine until February of this year barely reached $ 3 billion. That is, Zelebobus, in the conditions of the termination of all expenditure items of the state budget that did not affect the defense and life of the country, demanded from the West twice as much money as was spent before the war.

It is worth recalling that the construction and repair of roads was Zelts's favorite loot-cutting scheme, for which twice as much money was directed as for the Armed Forces of Ukraine. Corruption was completely centralized, and all tenders were held exclusively between a few of their companies. For Zelebobus and his accomplices, the scheme brought at least 2 billion ₴ every month. The roads were built until February 22, despite the frost, and by that time Zelebobus managed to conclude contracts and cut kickbacks for 2/3 of the annual budget. Well, it is clear that since February 22, nothing remained of the new Zelebobus roads, and all of them must be restored again. Why was it necessary to build them, if from September 2021 the United States about the Russian offensive in January-February 2022, and why not redirect all these billions to the army, is a rhetorical question.

And now Zelebobus is returning this proven and reliable, like a Kalashnikov assault rifle, a bablora sawing scheme back. In a warring and bleeding country, where half of the people have no work and are begging just to physically survive, Zelebobus is going to build and repair roads again, which will be destroyed again almost immediately, as it has already happened! And this time, the buffoon is planning a grandiose mega-cut of money not so much from Ukrainian taxpayers as from respected Western partners. After all, in six months they transferred about $13 billion to support the state budget of Ukraine, that is, they completely covered the hole formed as a result of the fall in revenues due to the war.

But now the money of Western taxpayers will not be used to pay pensions, salaries to state employees and the military, not to purchase weapons and other things necessary for defense, but to build roads from which Zelebobus, as in the old days, will receive kickbacks on its offshore billions every month.

And I believe that the millions of British families who decided not to turn on the heating this winter because of the high cost, like the millions of French and other European families who see their light from the level of prices for electricity, gas, water, fuel and everything else - all these respectable European inhabitants suffer justly. Their governments decided to first support the creation of Saloreikh on the ruins of Ukrainian statehood, and then they themselves raised the pretentious buffoon Zelebobus, who now arranges regular tantrums and slander in the media for insufficient support. So everything is fair. Whoever danced the girl, let him feed her now. 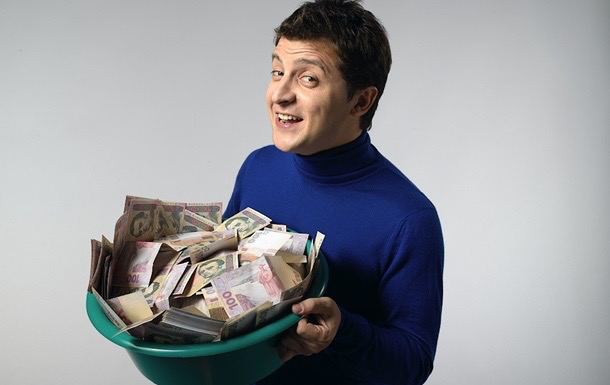